At the World Rugby Hall of Fame

Ever thought you could beat Shane Williams for pure speed and reactions? Here is your chance!

The former Welsh international and record try-scorer Shane Williams has launched the Handoff Challenge, inviting rugby fans to visit the World Rugby Hall of Fame here in Rugby to try and beat his record. 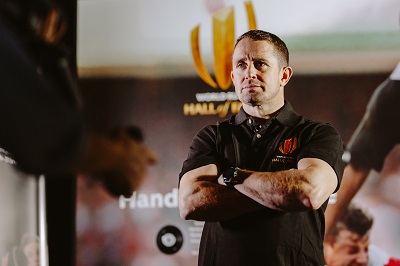 The Handoff Challenge consists of a speed and reactions test where participants have 30 seconds to use their hands to hit as many targets that light up as possible.

An online leader board on-site and on World Rugby's media channels will display the top scorers. The best 10 at the end of each week will win a goodie bag full of fantastic Hall of Fame merchandise. In addition, entrants who beat Shane's score of 45 hits, film themselves doing the challenge and post it on social media with #WorldRugbyHOF and @WorldRugby will have the chance to win a signed and framed Shane Williams jersey.

Shane Williams is not unfamiliar with the town of Rugby. He was present at the opening of the World Rugby Hall of Fame in 2016 and was inducted that same year alongside rugby greats such as Brian O’Driscoll and Lawrence Dallaglio.

“You don’t have many opportunities in life to beat a former international winger based on pure speed and reactions and if you think you have what it takes to beat a Hall of Famer, come to Rugby! The Hall of Fame is the perfect place to host this challenge and I’m convinced participants will leave Rugby inspired by the history of our sport.”

The Shane Williams Handoff Challenge is available to all Hall of Fame visitors aged 16+ and will run between 18 December 2019 and 31 January 2020.

The World Rugby Hall of Fame is a great day out for all the family and celebrates the legends, history and spirit of the game through state-of-the-art HD touchscreen technology. Marvel at the size of Martin Johnson’s RWC 2003 victory parade suit, get goose bumps from the All Blacks’ powerful haka, see the evolution of the rugby law book from 1913 to present day and admire the jersey worn by South Africa captain Francois Pienaar as he led the Springboks to their first Rugby World Cup triumph in 1995.

For more information contact the Visitor Centre on 01788 533217 or visitor.centre@rugby.gov.uk .